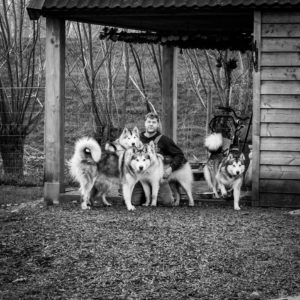 The Alaskan Malamute is a strong, powerful, resistant, sweet and affectionate dog at the same time.

Only by living with the Malamute every day you will understand and appreciate his character.

The Malamutes are strong, determined and extremely intelligent, but above all with an extraordinary instinct, comparable to that of the wolf.

The Malamute considers you part of his pack.

The behavior of a purebred dog mainly depends on the purpose for which he was originally bred. With the Malamute it was mainly working and surviving under the harshest conditions. This still determines his current character: survival = first me and then you. The Malamute is a smart and strong dog.
The Malamute cannot be compared to the more popular breeds like shepherds or retrievers, and for good reason:

his temperament and the many primal drives he still has do not make him one of the easiest breeds.

A Malamute owner must therefore make the necessary efforts to properly train and supervise his dog. After all, here he does not live in a vast polar region, but in a densely populated environment to which he will have to adapt

It is your job to make it clear to the Malamute who is boss.

The key with a Malamute is coexistence and respect.

The Malamutes actions must always have a purpose.

The non-nagging malamute is certainly a very affectionate dog.

The Malamute is not inclined to defend the territory and the guard, there are some exceptions. 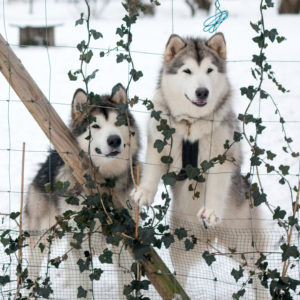 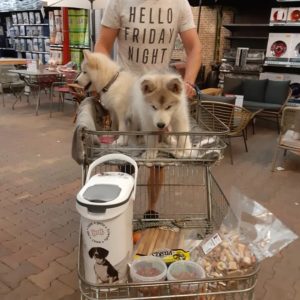 A Malamute has a strong tendency to test the boundaries of its owners. He knows exactly with whom he can go how far. An adult dog of about 40kg to who notices that he can use aggression successfully should not be underestimated. That does not mean that he needs a tough approach, but one with expertise. So you should study dog behavior and language. It will be good that from an early age you start socializing your Malamute in a wide variety of situations; this will make him confident and at the same time balanced and calm. It may happen that the Malamute growls towards other dogs. It is us owners who contribute to the formation of the character of our dog.
They have their own specifics, our task is to understand and fulfill them as much as possible. It is the puppies need to be respected to have a place of his own where no one (including children) goes to disturb him!

Most Malamutes have an average tolerance towards children. But only they as a puppy are of course well socialized with children and have not had any bad experiences. As with any dog, the Malamute requires children to know and observe the rules of handling, so it is essential that a child is never left alone with the dog without the parent’s supervision. Malamutes are not suitable “playmates” not only because of their size and sometimes rudeness but also because they have completely different interests than children. An additional point of concern with the Malamute may be that some are quite food-oriented, after all they are bred to survive. Certainly in a household with small children, one must be very attentive to this, accidents can still happen without malicious intent.

I can say that the Malamute needs space, motion and contact with its owner. If you don’t have time, desire and love to dedicate to him, I suggest you give up a most faithful friend.

Malamutes are very clear in their behavior towards dogs: their body language is unmistakable. Despite the fact that they have to run for a sled with other dogs, that does not mean that they always like strange dogs and want to play.
Good species-oriented socialization with different types of dogs: large, small, fluffy, bald, white or black, is essential, but even so, they do not shy away from conflict with dogs of the same sex. Adult Malamutes are not usually friends and the Malamute owner will need to keep his dog from trying to show all other dogs who is the strongest. When they start fighting, things can get really hard and the winner’s experience allows him to become the scare of the neighborhood. They still seem to play nice as a puppy, especially when males reach sexual maturity, they start to consider other males as serious competitors. In practice, this means for many Malamutes that they cannot run free with other dogs and that the owner must be strong in his shoes. Literally and figuratively.
But Malamutes love to go through life as a couple! Two dogs of the opposite sex is ideal and then enjoying that beautiful clear dog language. Or is it still wolf language?

Other animals are prey. The urge to survive is very deeply rooted, including his hunting instinct. Most dog breeds sometimes chase a cat as a game, Malamutes really still pretend to be a wolf. That means they hunt, kill and eat if given the chance. Cats he grew up with from a young age he will see as a pack companion, but not strange cats. He sees the cute rabbit from the girl next door and the chickens from the farmer further down the road for breakfast. With livestock and small livestock, you should always be careful! And it goes without saying that in a forest when he sees or smells wild, he immediately has the tendency to go after it, he no longer hears the command HERE. That is also one of the reasons why many Malamutes never run free.

Malamutes are absolutely not stable or loyal to the owner when he / she is out of sight, a good fence of about 2 meters (and preferably also some in the ground) is really necessary because adventure lures outside!
At home, he is a pleasant, calm, sometimes even lazy-looking dog. It is by no means a nervous attention grabber that gets in his way all day long if he gets enough exercise! If he has less exercise he will put his energy into other things: trying to dig in the garden or does the plants not like him?, Turning a sofa into a chair, the wallpaper was already not pretty, etc. And if he also has to stay home alone then he just a give a crying concert for the whole neighborhood! Because they are still real pack animals, some can have trouble with being home alone anyway and they express this by letting everyone hear where they are.

All dogs learn by association, it is mainly about the association with the first time the dog shows certain behavior: was that nice or not. Malamutes are no different in that, they are just a bit more inventive at most. This means that the Malamute owner must be able to think ahead to prevent the dog from being successful in his attempts.

The Malamute likes to go out with his people and, if it’s up to him, sometimes just as happy alone. He should learn to watch his boss as early as possible. The world revolves around his boss, not him. If that also gives him the occasional reward (“love” goes through the stomach), then a Malamute can go far in obedience too. It is nonsense that arctic dogs cannot learn anything, it is mainly the owner who sometimes needs more effort and perseverance than with the more owner-oriented breeds and it is also a matter of the right instructions.

Malamutes can use not only their legs, but also their head. In fact, dogs often become more tired from mental activities than from physical ones. Obedience training, tracking and even agility are therefore excellent activities for a Malamute.

Alaskan Malamutes are a joy to live with, but need an active lifestyle to make sure their needs are met.

They are a loyal companion with a tremendous personality, if raised correctly, they will give you the most rewarding and challenging relationship.